Tumblr this week quietly announced plans to roll out a new advertising program across its site which will see it implementing ads across users’ blogs. The company did not provide specific details on how the program will operate, but it appears to be an expansion of its earlier Creatrs program, which connects brands with Tumblr users directly, instead of having advertisers work with third-party influencer networks.

Now, Tumblr says that the same opportunity provided by its Creatrs program will be available to “any eligible Tumblr—poet, musician, fan artist, and misfit weirdo memelord alike,” the company explains on its official Staff blog.

Tumblr users wishing to earn money in the program will need to go through some sort of registration process, which is launching this year, Tumblr also noted. The details of the partner program and how users will be onboarded is still being worked out, however.

In addition, users can opt out of having ads displayed on their blogs by turning off on-blog advertising in the Settings. Yes: that means that ads on blogs will be the default – effectively allowing Tumblr to monetize its network of over 306 million blogs from 65 million users, unless those users take an explicit action to disable ads. Users will also be able to disable ads on a per-blog basis if they choose.

Tumblr says that ads will appear in three places, including the main page of the Tumblr blog if the blogger is using the default Optica theme for their blog, as well as on the slide-out section on the web, and on Tumblr’s mobile apps and mobile web.

The company says it plans to launch the ads on Thursday.

“This was a long time coming, and will be one of the biggest projects we’ve ever launched at Tumblr,” wrote Tumblr founder David Karp on his blog. “It’s been a busy summer—a new GIF maker, live video, new messaging stuff—and there’s a whole lot more on the way. Next up: getting you paid for your work.”

The announcement comes at a time when Tumblr’s future is up in the air, given that parent company Yahoo this week was acquired by Verizon in a $ 4.8 billion deal. Verizon gains the Tumblr social network as a part of the larger group of content sites it’s taking over, which also includes Flickr, Yahoo News and Yahoo Sports. (Disclosure: Verizon also owns TechCrunch parent company, AOL.)

While Tumblr is inconsequential to Verizon in terms of making its Yahoo deal profitable, it’s still unknown how it will fit in with Verizon’s ad strategy in the future – that is, if Verizon will forget the site and leave it alone, or perhaps even invest it in its further development in a way that Yahoo failed to do.

Reached for comment, a Tumblr spokesperson said, “We continue to deliver ad solutions to grow Tumblr’s business and maximize value for our advertisers and community. Featuring Yahoo display and Gemini native ads across the Tumblr blog network is another example of these ongoing efforts.” 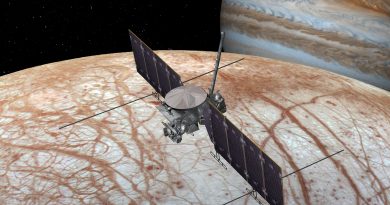 The oceans of Jupiter’s moon Europa may be habitable, according to NASA

Agile marketing in the era of COVID-19, BLM and recession

Microsoft Outlook, Office 365, Teams, and more are experiencing an outage

Some Microsoft services, including Outlook, Office 365, and Microsoft Teams, are currently experiencing an outage, according to Microsoft’s Office status

The TikTok download ban ‘would be devastating,’ attorneys argue in court

Misinformation is everywhere online — and it’s hard to decipher. But confronting your friends and family after you’ve seen them

How to bring more value to your email marketing